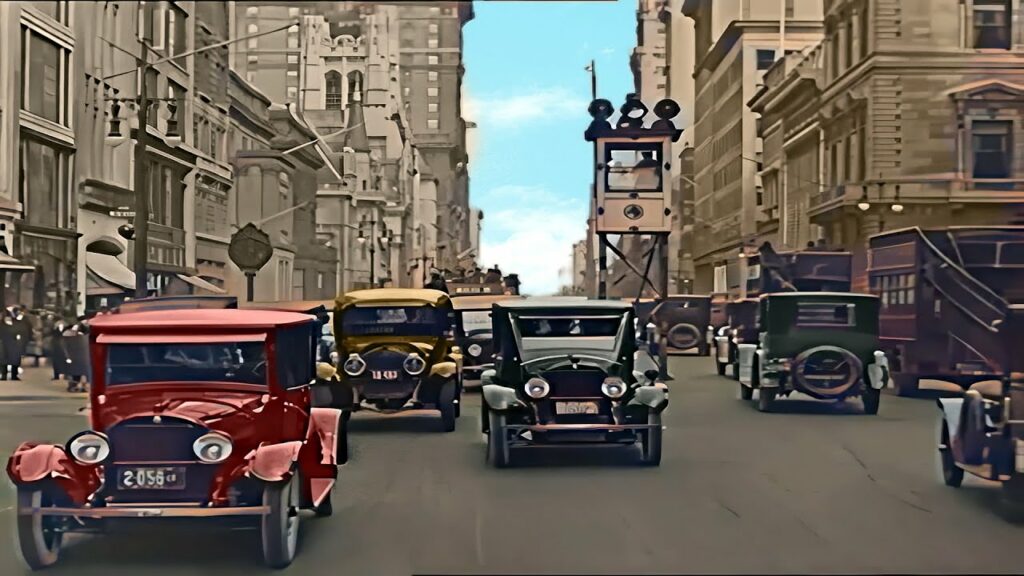 Woody Allen’s Midnight in Paris stars Owen Wilson as a Hollywood screenwriter on vacation in the French capital. Alas, the City of Lights as it is in the twenty-first century doesn’t satisfy him. When he walks his streets he thinks only of the nineteen-twenties, when a traveler in Paris could easily cross paths with the likes of Paul Gauguin, Henri Matisse, and Edgar Degas — as well as expatriates from Pablo Picasso and Djuna Barnes to F. Scott Fitzgerald and Ernest Hemingway. Or so he imagines, at any rate, and so he goes on to experience when he finds himself transported back in time to the city of the “Lost Generation” at each stroke of midnight.

With the video above, you, too, can take a trip to nineteen-twenties Paris — as well as nineteen-twenties New York, Chicago, San Francisco, London, Berlin, Stockholm, Copenhagen, Amsterdam, Nice, Geneva, Milan, and Venice. A compilation of period footage sourced from the Prelinger Archives, it lightly colorizes, adds ambient sound, and in other ways enhances its disparate materials to make them feel all of a piece.

And indeed, the clip plays almost as if shot by a single, and singularly ambitious, world traveler of one hundred years ago. That hypothetical traveler’s world is both ours — filled as it is with such recognizable and ever-photographable sites as the Eiffel Tower, the gondolas of Venice, and the non-latex-clad cyclists of Copenhagen — and not.

Whether traditional or modern, the dress of everyone on the street looks neater and more formal than that worn by urbanites in the main today. In some cities, horse-drawn carriages still make their way through the traffic of buses, trams, and waves of seemingly identical personal cars. (Ford manufactured more than two million Model Ts in 1923 alone.) The nineteen-twenties brought rapid urban development in both the New World and the Old, as well as rapid development in motion photography. Not for nothing was it the decade of the “city symphony” film; for equally good reason, it remains the decade of which many of us dream, even a century later, when we want to feel the exhilaration of modernity.

Watch 1920s “City Symphonies” Starring the Great Cities of the World: From New York to Berlin to São Paulo

Footage of Cities Around the World in the 1890s: London, Tokyo, New York, Venice, Moscow & More

Based in Seoul, Colin Marshall writes and broadcasts on cities, language, and culture. His projects include the Substack newsletter Books on Cities, the book The Stateless City: a Walk through 21st-Century Los Angeles and the video series The City in Cinema. Follow him on Twitter at @colinmarshall, on Facebook, or on Instagram.