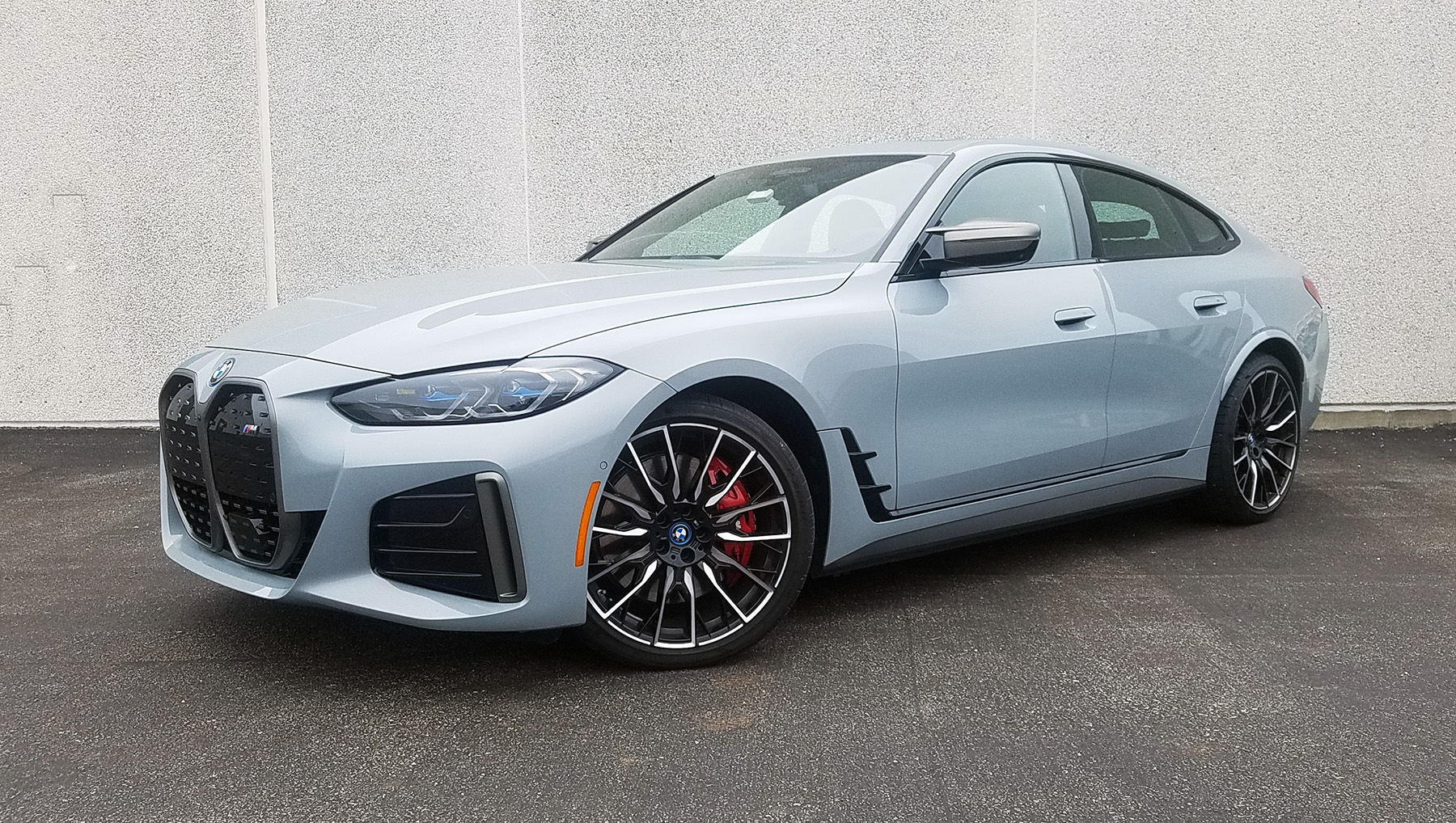 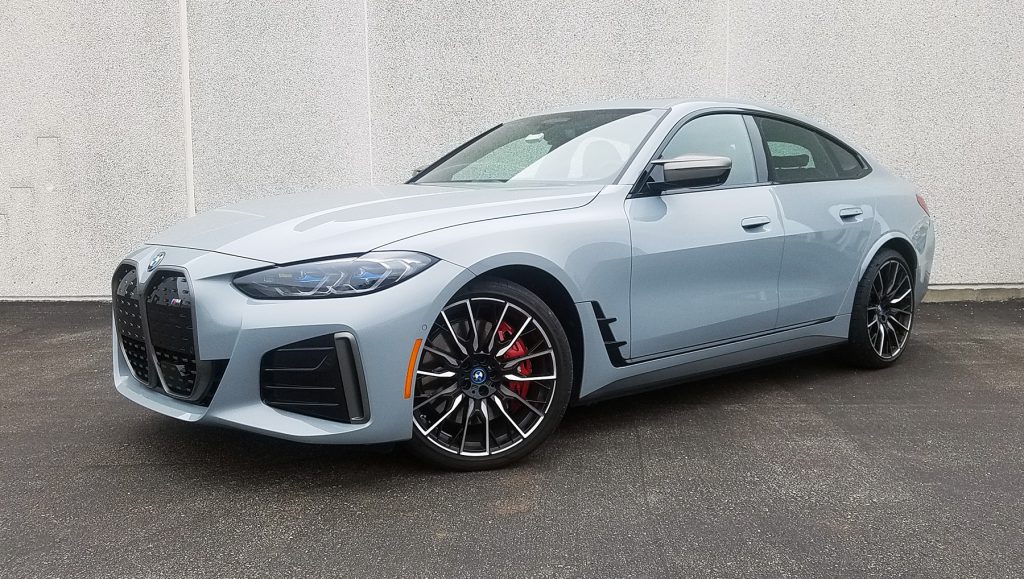 The not so good: High-performance equipment–particularly the upsized wheels and tires–takes a significant toll on driving range; stingy rear-seat headroom and legroom; polarizing front-end styling

More i4 price and availability information

When it comes to electrified vehicles, it appears that BMW has decided to exchange quirky for quick. The curious cube that was the i3 hatchback is out, replaced for 2022 by the i4, a sleek 4-door hatchback sedan with a more conventional profile but an available twin-motor configuration that can put a real jolt in your drive.

The i4 is one of two pure electrics making a debut in BMW showrooms, the other being the iX premium-midsize SUV. It is a low-roof 4-door “coupe” with the essential form of the redesigned gas-engine 4-Series Gran Coupe that returns to the line after skipping the 2021 model year. Two i4s are available: a single-motor, rear-wheel-drive eDrive40; and the dual-motor, all-wheel-drive M50 that Consumer Guide had the chance to test. 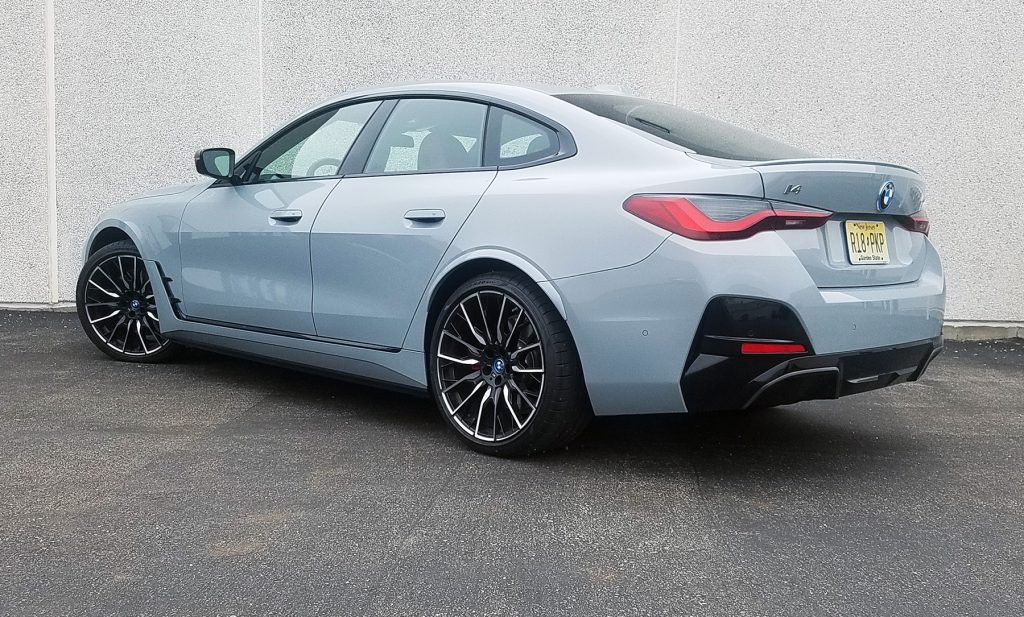 The BMW i4 debuts for 2022 as a pure-electric variant of the redesigned-for-2022 4-Series Gran Coupe.

So far, the i4 M50 is as close as BMW has come to making a full-fledged high-performance M model from one of its electrified vehicles. (Currently there is no iX counterpart to it but an M-influenced SUV is expected in 2023.) In addition to giving it more power and two extra drive wheels than the eDrive40 has, BMW also bestows the M50 with an adaptive suspension; bigger, staggered-width wheels and tires; and larger M Sport brakes. With delivery, the M50 starts at $66,895—a $10,500 jump from the 1-motor i4. An option load that included all four major packages listed for the M50 raised the price of the test car to $76,670.

Peak output from the twin motors works out to 536 horsepower and 586 lb-ft of torque. The manufacturer says that’s enough oomph to launch the M50 from 0 to 60 mph in 3.7 seconds. The copious, always-there torque radiating through the single-speed drivelines makes for immediate standing-start launches as well as startlingly responsive and rapid acceleration out on the highway, whether in “Sport” or “Comfort” driving mode. As moves your right foot so moves the car.

The optional BMW Curved Display upsized digital instrument panel/infotainment touchscreen tacks on another $1000, but makes the already sophisticated cabin feel even more cutting edge, though learning all the nooks and crannies of the infotainment system can be daunting. The center console houses the start/stop button, infotainment control interface, drive-mode selector buttons, and electronic parking brake switch.

The giveback for this kind of performance is taken out in range. There’s only one type of battery for the i4 line, an 80.7-kWh unit. Sipping from it, the tamer eDrive40’s EPA-projected range is 301 miles with standard 18-inch wheels but 282 miles with 19-inch wheels. Meanwhile, the more demanding M50 has a 270-mile range on base 19-inch wheels that falls to a so-so 227 with the 20-inch rims from the extra-cost High Performance Package added to CG’s tester. 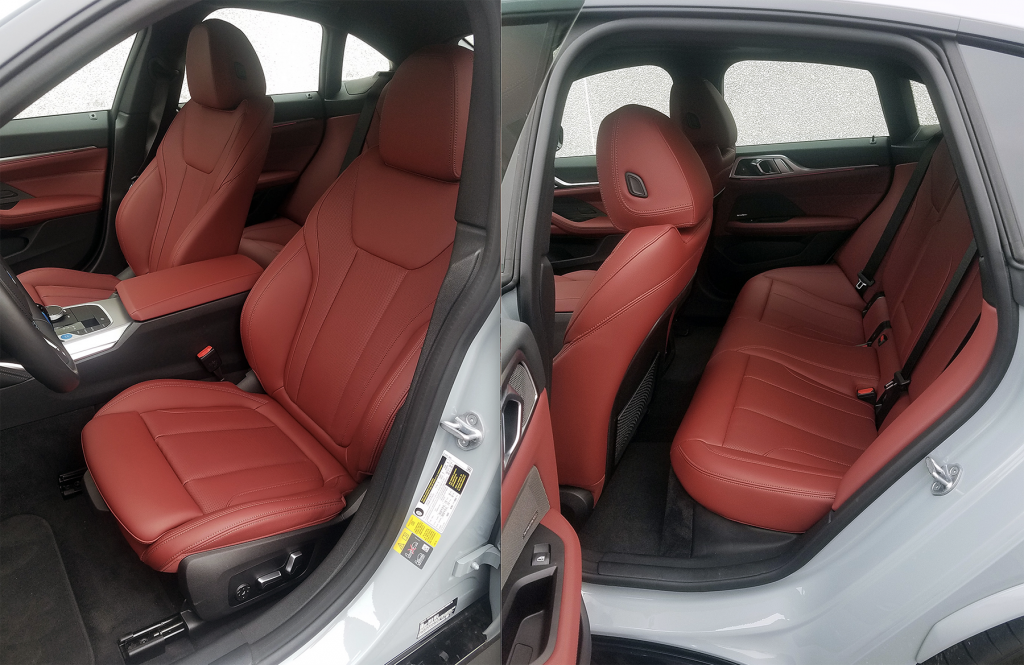 There’s respectable space for front-seat occupants on comfortable, supportive seats, but the rear seat is cramped for adults in terms of both headroom and legroom. The perforated Tacora Red leatherette upholstery looks great.

For what it’s worth, this driver received the car charged to 74 percent with a 177-mile indicated range, then burned off 58 percent of the available charge and 59 percent of the range during a 96.6-mile stint with majority city-style driving. Charging it—fitfully—on Level 1 household current (“insufficient grid power” kept interrupting the attempt) raised the charge from 31 to 46 percent and indicated range from 73 to 108 miles. A subsequent drive of 28.8 miles almost evenly divided between city and highway speeds consumed 22 percent of this charge but just 16 percent of displayed range. Driving and outdoor-charging temperatures were in the 50s and 60s Fahrenheit. A 240-volt Level 2 device can complete a full charge in under eight hours; a direct-current “fast charger” can give the i4 up to 90 miles of range in 10 minutes. A tap left or right on the gear-selector lever on the console summons one or the other of the regenerative-braking styles: a more relaxed (and seemingly random) “adaptive regeneration” or a maximum-drag effort that enables one-pedal driving.

The i4 inherits its versatile hatchback configuration from the 4-Series Gran Coupe. The cargo-area aperture is generous, and the rear seats fold almost flat to create a spacious load floor. A duffel bag is included for the charging cable.

Chassis-wise, the test car did a passable audition for the role of M sedan it hopes to be. The electronically controlled dampers effectively strained out most bumps for a fine ride that firmed up in Sport. Body control around corners is good. The variable electric power steering made the M50 easy to handle, even with a weightier Sport feel, albeit without the gritty sense of feedback from the pavement that enthusiast drivers like. The suspension and tires are quiet but BMW pumps in levels of “IconicSounds” operating noise—basically a varying-volume electronic hum designed to rise and fall with the speed and power demand of the car. (You can turn this feature on and off as you like.) Braking is much more direct and natural at the pedal than you might expect from an electrified car.

The i4 M50 boasts an impressive 536 horsepower from its dual-electric-motor powertrain, and it feels every bit as quick as that rating suggests. The optional 20-inch wheels ride reasonably well, but take a toll in driving range.

A $1000 contribution to the Brooklyn Grey Metallic test car’s full price was the gently curved unitary display screen for driving and infotainment controls. It’s striking and vibrant to see but can be complicated to use with BMW’s penchant for screen menus for every imaginable whim, and it is linked to an iDrive remote console controller. (Note that the standard dual-zone climate control is managed on screen and not via separate physical knobs and buttons.) The screen is a touchscreen for those who prefer more direct contact.

Passengers settle onto supportive perforated “SensaTec” leatherette seats. The same material covers the dash, which is further highlighted with a mesh-style aluminum trim. Front occupants have good head- and legroom. Rear passengers will have decent space for legs under most circumstances but the style-driven roof slope takes a toll on headroom—there’s 1.6 inches less of it than in front. There isn’t all that much room for their stuff, either. The glove box and console cubby aren’t especially big. Neither are the map pockets in the front doors. A small drawer to the left of the steering column serves the driver, and a covered bin at the head of the console has cup holders and space for the optional wireless charging pad. Net pouches are on the backs of the front seats and pop-open cup holders are in the center-rear armrest.

For better or worse, depending on your perspective, the i4 doesn’t veer far from the styling of the 4-Series Gran Coupe.

Cargo space is similarly somewhat limited. The rear seats do fold in a 40/20/40 split and drop flush with the cargo floor—which helped this tester get a half dozen sacks of garden mulch home when they wouldn’t all fit side by side between the wheelhouses.

For the most part, the i4 M50 looks and acts like a conventional sport sedan. Its powerplant may be a departure for BMW but the rest is familiar territory.

The BMW i4 M50 doesn’t scream “electric car,” and that might be a big part of its appeal to premium-brand performance-sedan shoppers. Though its driving range isn’t impressive against the latest rival EVs, the i4 M50’s acceleration is seriously quick, and it looks and feels like a true BMW inside and out.