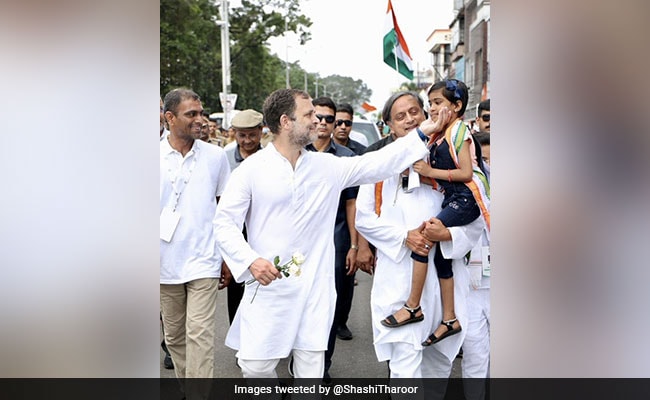 Shashi Tharoor, who is believed to be considering running for Congress president, met with Sonia Gandhi today, shortly after giving his public approval to a petition seeking reforms in the party.

The Congress MP from Thiruvananthapuram endorsed on Twitter a petition by a group of young party members seeking reforms and a pledge by candidates for Congress chief to implement the party’s Udaipur declaration.

I welcome this petition that is being circulated by a group of young @INCIndia members, seeking constructive reforms in the Party. It has gathered over 650 signatures so far. I am happy to endorse it & to go beyond it. https://t.co/2yPViCDv0vpic.twitter.com/waGb2kdbTu

The “Udaipur declaration” adopted by the Congress leadership in May sums up the party’s commitment to fair internal elections and rules that allow one candidate per family and one person per post, besides a five-year cap on posts.

Mr Tharoor shared the petition on Twitter, adding that it has been signed by over 650 people till now.

“I welcome this petition that is being circulated by a group of young Congress members, seeking constructive reforms in the Party. It has gathered over 650 signatures so far. I am happy to endorse it and to go beyond it,” the former Union Minister tweeted.

Mr Tharoor’s move comes amid signs that the Congress is heading to its October internal election with a predilection for a Gandhi as chief.

Recently, the party asked its state units to request Sonia Gandhi to pick state unit chiefs and members to the powerful All India Congress Committee (AICC). Critics like the “G-23” leaders – who wrote to Sonia Gandhi in 2020 asking for internal reforms – feel it sets the stage for the Gandhis keeping the top post, with or without an election.

As many as three state Congress units have urged Rahul Gandhi to reconsider his decision to keep out of the race and take charge as Congress president. More states may follow.

To many, the move smacks of an attempt to choose a Congress president by consensus instead of an election.

Mr Tharoor is a member of the “G-23” and has not ruled out the possibility of contesting the Congress president polls.

He had told PTI recently: “I have only welcomed the fact that an election will be held. I believe that is very good for the party.”

He added: “Of course it is gratifying that this general statement of democratic principle has immediately led to large numbers of people around the country welcoming the prospect of my contesting. But as I have made it clear, I have not declared my candidacy.”

“I hope many will contest in order to give the membership a wide choice. So far I have neither ruled myself in nor ruled myself out,” the former Union minister had asserted.

Members can file nominations between September 24 and 30. The election, if required, will be held on October 17 and the results will be declared two days later.

Probing 4 Indian Cough Syrups After 66 Children Die In Gambia: WHO