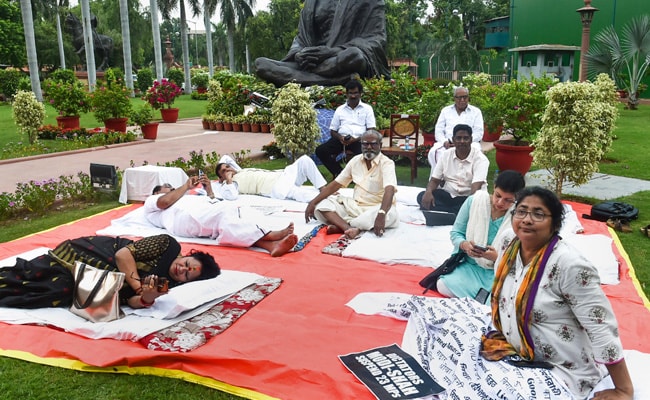 The MPs are holding the protest near the Gandhi statue.

From curd rice and idli-sambhar to tandoori chicken, ‘gajar ka halwa’ and fruits, Opposition parties are taking turns to arrange regional cuisine for MPs on a 50-hour relay protest against their suspension and demanding discussion on price rise.

In a show of solidarity and political strength, the Opposition parties have come together to create a duty roster for the protest with every party taking responsibility for making arrangements, including food, for those sitting on the dharna.

The roster is being circulated on a dedicated WhatsApp group, keeping everyone in the loop about the day’s arrangements.

Twenty suspended Rajya Sabha members started the protest inside the Parliament complex on Wednesday, with sources close to PTI saying the Opposition declined the Chairman’s offer that they express regret over their members’ behaviour in the House to get the suspension revoked.

The MPs are holding the protest near the Gandhi statue and will stay at the site through the night, said the Trinamool Congress’ (TMC) Dola Sen, who is one of the suspended.

The parties which will be a part of the protests include the TMC, DMK, AAP, TRS, Samajwadi Party, Shiv Sena, CPIM, CPI, JMM and the Kerala Congress.

Sources close to PTI said the parties have decided that they will try to arrange regional cuisines for the MPs for their meals.

On Wednesday, the MPs had idli-sambhar for breakfast which was organised by DMK MP Tiruchi Siva. The lunch of curd rice was also arranged by the DMK. The menu for dinner is roti, daal, paneer and chicken tandoori, courtesy of the TMC.

DMK’s Kanimozhi, who was instrumental in planning the roster, came to the protest site carrying ‘gajar ka halwa’, while TMC arranged for fruits and sandwiches.

On Thursday, the DMK would be in charge of breakfast, the TRS for lunch and the AAP would arrange dinner. The AAP was also in charge of erecting a tent for the MPs to shield them from the scorching sun but permission for it was denied by the authorities.

Sources said that the parties have taken it upon themselves to appoint leaders to take turns sitting at the protest site for one to two hours in support of those who have been suspended.

Samajwadi Party’s Ramgopal Yadav, Jharkhand Mukti Morcha’s Mahua Majhi and leaders of Nationalist Congress Party — none of whose members have been suspended — have given their time to sit with the protesting MPs as a mark of solidarity.

The leaders, however, will have to sleep under the sky, with their request for a tent being denied by authorities, as no structures can be built, even temporarily inside the premises.

The protesting MPs can, however, use the toilet in the bathroom of the Parliament library.

Opposition leaders said the authorities have fully cooperated with them to arrange a security team and cleaning staff for the protesting MPs. Arrangements have also been made for their exit and entry.

While the Congress and the other opposition parties were protesting at different venues in the morning, by the evening, it seemed that they had come together on the issue of price rise.

Senior Congress leader, Jairam Ramesh visited the protest site and said his party will be part of the day-night dharna organised by the opposition parties.

(Except for the headline, this story has not been edited by NDTV staff and is published from a syndicated feed.)