John Fetterman Is Very Online. That’s Not Why He’s Ahead. 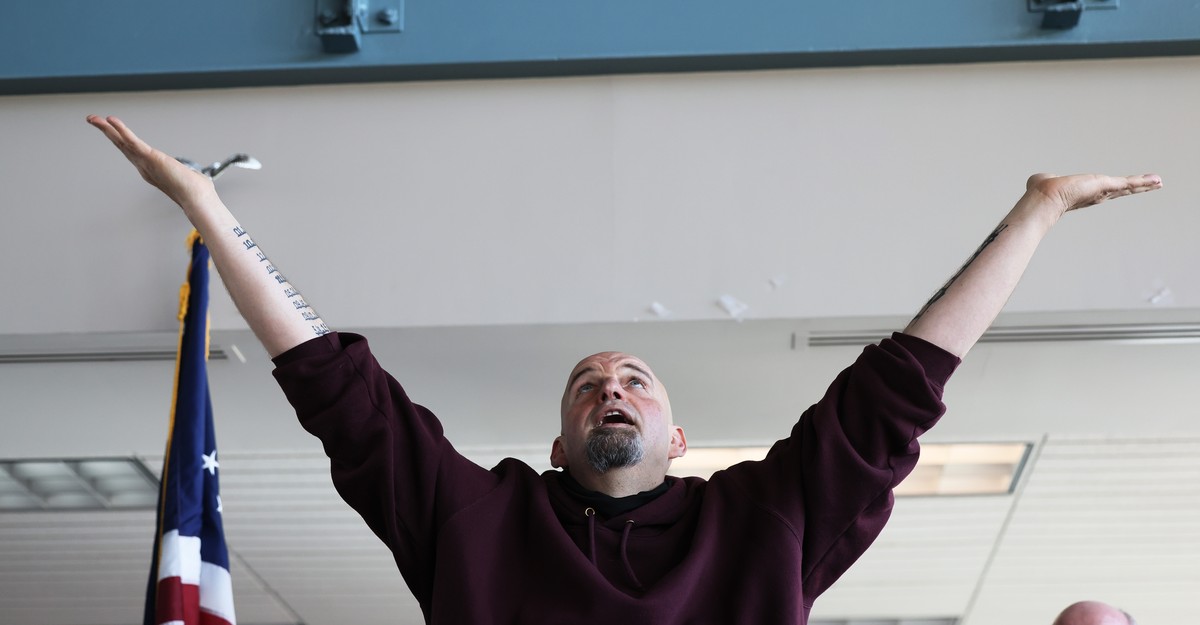 This is an edition of The Atlantic Daily, a newsletter that guides you through the biggest stories of the day, helps you discover new ideas, and recommends the best in culture. Sign up for it here.

The Democrat running to be Pennsylvania’s next senator is famous for his ultracasual aesthetic and irreverent social-media strategy.

But first, here are three new stories from The Atlantic.

John Fetterman has been leading the Pennsylvania Senate race for a while, but this week’s Fox poll shows one of the biggest gaps yet: He’s leading Republican Dr. Mehmet Oz by 11 points. You’ve likely heard a million different descriptions of Fetterman by now, which is probably because the man is so fun to describe. He’s tall and broad, with a furrowed brow and a curmudgeonly personality—like Shrek in a hoodie and cargo shorts. Real rough-and-tumble Rust Belt vibes. And those vibes, along with his focus-on-the-working-class campaign, have helped him appeal to a lot of different voters, including some Republicans. “He is testing the idea that leftist candidates can win non-leftist voters with the right aesthetics and a platform of ‘workers, wages, weed,’” as my colleague David A. Graham wrote in May.

But Fetterman has also become well known recently for his relentless roasting of Oz on social media. He’s posted meme after meme on Twitter mocking the Trump-endorsed Republican, and has reminded voters that Oz is from New Jersey, not Pennsylvania. Fetterman has enlisted the New Jersey celebrities Steven Van Zandt and Snooki to make fun of Oz in videos, and he’s started a petition to induct Oz into the New Jersey Hall of Fame. “Could John Fetterman Shitpost His Way to the U.S. Senate?” The Daily Beast asked earlier this month. “I mean we sure are trying,” Fetterman responded on Twitter.

Some in Fetterman’s party aren’t supportive of all this trolling. “With all eyes on Fetterman and Oz, Pennsylvania, and perhaps politics itself, has become an afterthought,” Luke Winkie wrote this week in Slate. I get this criticism, but I think it’s a bit silly; Fetterman is still posting about policy goals. He’s not leading in the polls because of his posts on Twitter, a platform that most Democratic voters are not even on.

The more important thing to note is that Fetterman’s constant posting seems like a way to distract from—or at least compensate for—his health problems. The progressive Democrat has spent most of the summer off the campaign trail since having a stroke in May, when doctors implanted a pacemaker with a defibrillator. There are still lingering questions about Fetterman’s health. He’s recently started attending small private events, but he has yet to hold a non-fundraiser public event. In his first interview since the stroke, Fetterman told the Pittsburgh Post-Gazette that he still has problems with his hearing and sometimes slurs his words. He sounds pretty stilted in a video that he and his wife made this week.

The Pennsylvania race would probably be much closer if Oz was a better candidate; he hasn’t done much actual campaigning while Fetterman has been convalescing. Actually, Oz is one of many GOP candidates who seem—whether through scandal, bad decision making, or plain weirdness—to be mucking up the Republicans’ chances to win back the Senate. Fetterman is still the favorite to win in November. But his recovery process is going to make his autumn debates against Oz—if they happen—even more important.

Follow-up: This spring, Helen Lewis argued that the “Wagatha Christie” trial, a legal dispute between two wives of English footballers, was the most ill-advised defamation case since Oscar Wilde’s. Today, the High Court in London ruled against the plaintiff, finding no libel.

For the millions of adults who grew up watching him on public television, Fred Rogers represents the most important human values: respect, compassion, kindness, integrity, humility. On Mister Rogers’ Neighborhood, the show that he created 50 years ago and starred in, he was the epitome of simple, natural ease.

But as I write in my forthcoming book, The Good Neighbor: The Life and Work of Fred Rogers, Rogers’s placidity belied the intense care he took in shaping each episode of his program. He insisted that every word, whether spoken by a person or a puppet, be scrutinized closely, because he knew that children—the preschool-age boys and girls who made up the core of his audience—tend to hear things literally.

More From The Atlantic

And check out a new short story by Nick Drnaso, “Acting Class,” written in comic form.

If you’re staying home, think twice about streaming Netflix’s The Gray Man—Ryan Gosling is pretty to look at, but the film is devoid of passion. Try one of these underrated movies from our watch list instead.

Listen. Beyoncé is the pop star we need right now, and she’s back with her new album, Renaissance. Plus: The story of dance music in America is a story of boom and backlash.

Thanks for all the great spritz recommendations yesterday. Today, I wanted to share a New Yorker article that I haven’t been able to stop thinking about. It’s about a man named Steve in Colorado who adopts ancient, decrepit dogs and makes their final years happy and comfortable. Right now, his housemates include 10 perfectly named pups—​​Melvin, Fernando, Cat, Mrs. Woolworth, Raylene, Juanita, Willamena, Chalmer, Hertha, and Loretta—one lazy pig, and a blind turkey. I love these raggedy old creatures, especially Raylene, who seems like she was probably a glamorous movie star in her former life. (The story is worth a read if only for the delightful photos). To me, Steve’s determination to give these old dogs a home, despite the constant goodbyes, is nothing short of heroic. “The joy I get out of it far outweighs the pain,” he told the writer, Susan Orlean. “I remind myself that it’s not about me; it’s about what I’m doing for them. It’s about giving them a good life.”

Isabel Fattal contributed to this newsletter.

The Russian Clocks Are All Ticking

Get Ready to Rock with CX On Tour