Democrats in … Array? – The Atlantic 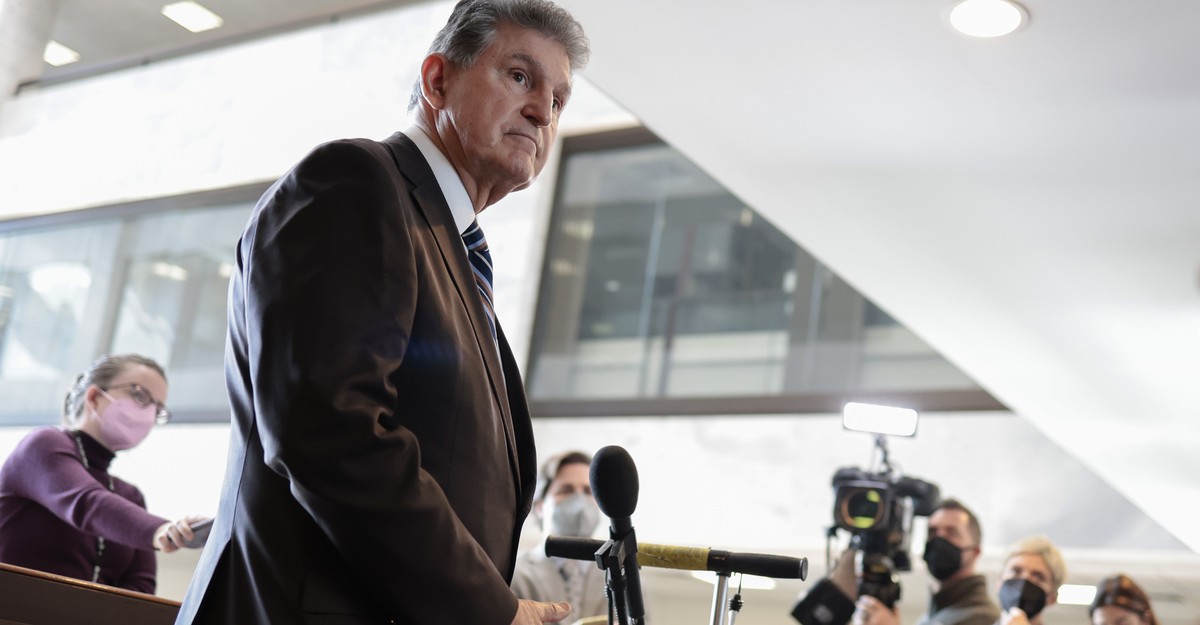 This is an edition of The Atlantic Daily, a newsletter that guides you through the biggest stories of the day, helps you discover new ideas, and recommends the best in culture. Sign up for it here.

Well, folks, it looks like Congress still has the capacity to surprise us.

But first, here are three new stories from The Atlantic.

The buzz on Capitol Hill has probably made its way to you by now: Senator Joe Manchin of West Virginia, one of the senators who’s held up the Democrats’ biggest agenda items over the past year, announced that he’s on board with a sweeping new proposal. The legislation, strategically called the “Inflation Reduction Act of 2022,” would reduce greenhouse-gas pollution and lower health-care costs, among other things, and will likely be up for a vote in the Senate next week. Robinson Meyer has more on what this legislation would mean for climate in particular.

Lots of people—activists, lawmakers, reporters—were stunned by this development. (You’ll see a lot of happy swearing from climate activists this week.) We journalists were surprised because we’d assumed that Manchin and Senate Majority Leader Chuck Schumer had stopped talking about any kind of climate-change package two weeks ago. Even before that, Manchin, along with Senator Kyrsten Sinema of Arizona, was responsible for killing Build Back Better, which was supposed to be the centerpiece of the Biden agenda—ambitious legislation that could accomplish several Democratic goals in one fell swoop. (It’s difficult to overstate how truly incensed Democrats have been about Manchin’s constant rejections.)

Only a handful of people in Congress seemed to have known about these Manchin-Schumer negotiations; this week, a few congressional staffers had actually staged a sit-in on the floor of Schumer’s office, urging him to push for climate action. Little did they know. Manchin told Politico that he didn’t spill the beans because he was worried about setting expectations too high: “I didn’t know if it could come to fruition. I really didn’t know, OK, so why talk about something, again, build people’s hopes up? I got the ire of everybody,” he said yesterday.

The other reason all of this is so surprising is because it seems like Democrats—for the first time in a long while—have pulled one over on the usually two-steps-ahead Republicans. A few weeks ago, Senate Minority Leader Mitch McConnell threatened to withhold GOP support from a new semiconductor bill unless Democrats dropped their plans for climate legislation, and Democrats did exactly that. But yesterday, immediately after that semiconductor bill passed the Senate, Manchin announced the new climate deal. Progressives are always blasting Democratic leadership for being too weak in the face of their GOP colleagues’ cynicism and strategery. This legislative caper, though, suggests that Democrats, too, can be conniving—if they want something bad enough.

And now, the usual caveats for Democrats: The Senate parliamentarian has yet to determine whether the bill can go through a process that bypasses the filibuster. When it comes time for voting, Republicans will uniformly oppose the bill, so Democrats will need all of their 50 members—which, as Rob points out, will require them to stop getting COVID and make it into work. Sinema’s support, in particular, could be tricky because she’s previously been pretty critical of some of the bill’s components. And a few Democrats could hold out because of concerns over state and local tax deductions.

But the significant thing for Democrats is that a proposal exists, it’s more than satisfactory for their progressive wing, and one of their most stubbornly moderate members is leading the way. We’ve witnessed a few unexpected deals in Congress recently, most born out of bipartisan negotiations: the June gun deal, for example, and the $1 trillion infrastructure bill. This Manchin-Schumer deal is different, though. Democrats, at long last, seem close to having all of their members in agreement on a really far-reaching set of policy changes. Sure, it’ll end up being a party-line vote, but it’s also a rare example of Democrats in … array. Just in time for a crucial election.

Within the past 15 years, social media has insinuated itself into American life more deeply than food-delivery apps into our diets and microplastics into our bloodstreams. Look at stories about conflict, and it’s often lurking in the background. Recent articles on the rising dysfunction within progressive organizations point to the role of Twitter, Slack, and other platforms in prompting “endless and sprawling internal microbattles,” as The Intercept’s Ryan Grim put it, referring to the ACLU. At a far higher level of conflict, the congressional hearings about the January 6 insurrection show us how Donald Trump’s tweets summoned the mob to Washington and aimed it at the vice president. Far-right groups then used a variety of platforms to coordinate and carry out the attack.

More From The Atlantic

Read. Romesh Gunesekera’s novel The Match, which devotes 16 pages to the sensory details of a cricket match that changed the main character’s life.

Or try another pick from our list of books every sports lover should read.

Watch. Beavis and Butt-Head Do the Universe, streaming on Paramount+, is a cathartic revival of the dirtbag comedy.

D.C. feels like a bowl of hot soup, so I’ve been spending a lot of time thinking about fizzy, refreshing adult beverages. For the past few years, my drink of choice on a hot day has been a classic gin and tonic—with a teensy splash of grapefruit juice if the bartender seems amenable. This summer though, I’ve developed a new obsession. I’m a few years behind the trend, but I have become a devotee of the Aperol spritz. That delightfully bitter syrup combined with the small hint of sweet orange? The friendly little bubbles?? Just incredible. Buonissimo! My friend and I are on a mission to find the best spritz in the D.C. area—and to develop a few good recipes of our own. We’d love some help. If you have suggestions for either, let me know at [email protected]. Maybe we can swap notes.

Isabel Fattal contributed to this newsletter.

Can you do a course in your 40s

Can you do a course in your 40s