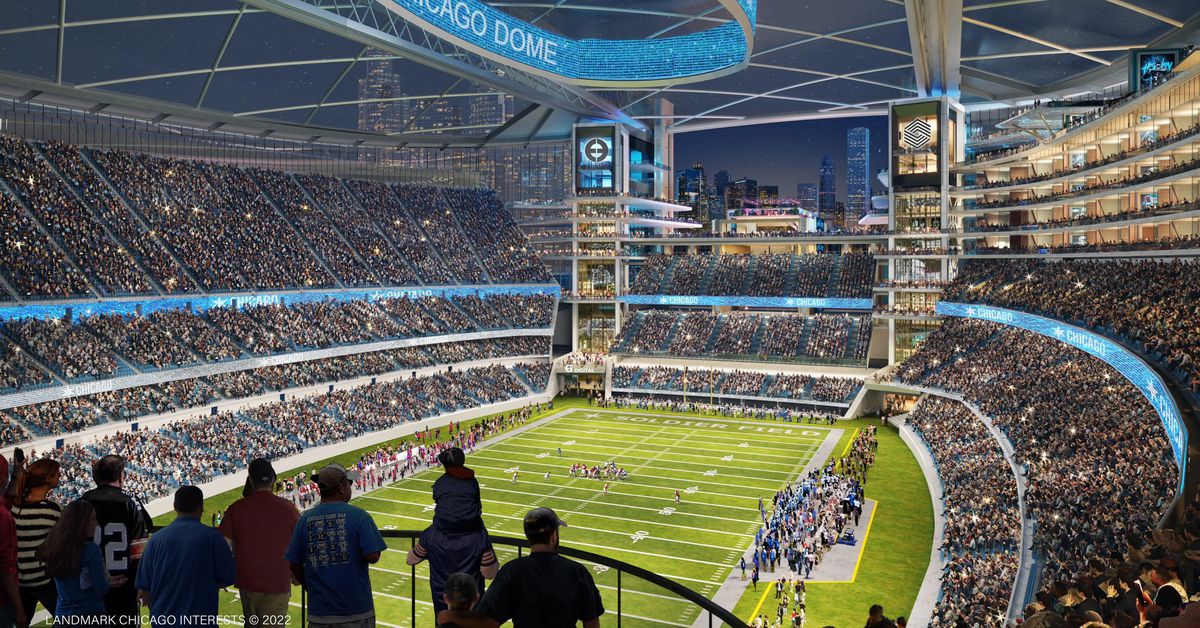 The possibility of the Bears leaving Chicago is hurtling towards its eventual conclusion, but mayor Lori Lightfoot is trying to throw everything at the team to convince them to stay. Lightfoot unveiled bold new plans Tuesday to renovate Soldier Field and bring the Museum Campus area into the 21st century.

It will also make Soldier Field a top-tier NFL stadium with tremendous opportunity for the Bears to fulfill their vision. pic.twitter.com/axdy9PeyNg

I’m not going to lie, this looks absolutely incredible. The open endzone design paired with a dome would unquestionably make this one of the most unique stadiums in the NFL, while remaining nestled in the heart of the city.

Still, on scanning these images there’s something that really jumped out at me.

This appears to be a solid glass platform, with no guardrails, attached to the upper deck of the stadium. Presumably this would be some sort of premiere experience, even at the one of the highest points in the stadium — but you could not pay me to stand on this thing for three minutes, let alone an entire game.

Now look, I know it’s entirely possible this architectural design element is supposed to be evocative, not practical. A way of saying “this is how we envision people watching football in the future.” Me, I just see someone spilling an overpriced Michelob Ultra on this glass panel before someone slips on it, falling off the edge and plummeting 150 feet before landing on an unsuspecting Staley Da Bear, seen here naked, wearing glasses and a wig.

However it looks like the death deck, as well as the whole stadium design might never come to pass. The Bears appear hell bent on joining the Cowboys, Commanders, Patriots and 49ers who left the city and moved out to the suburbs. The team has an investment in the Arlington Heights area, roughly 25 miles from downtown Chicago. When asked for comment on the Solider Field renovation plans by the Chicago Tribune, the Bears shot down any interest.

“The only potential project the Chicago Bears are exploring for a new stadium development is Arlington Park. As part of our mutual agreement with the seller of that property, we are not pursuing alternative stadium deals or sites, including renovations to Soldier Field, while we are under contract,” the Bears said. “We have informed the city of Chicago that we intend to honor our contractual commitments as we continue our due diligence and predevelopment activities on the Arlington Heights property.”

So we might never see the new-look Solider Field, or the glass death deck — but we’ll always have the memories.