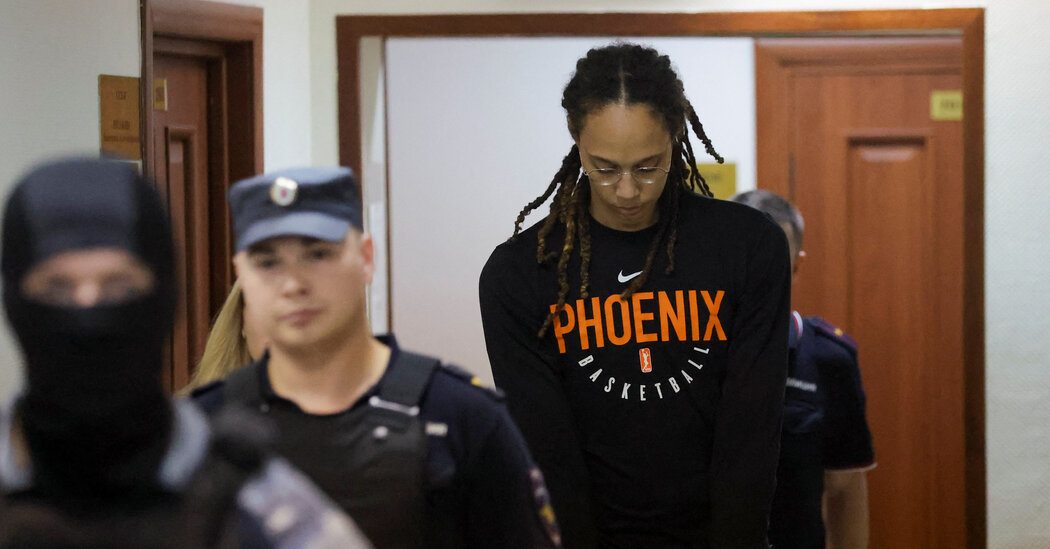 Brittney Griner, the American basketball star detained in Russia on drug charges, told a courtroom Wednesday that she had been tossed into a bewildering legal system with little explanation of what was happening and what she might do to try to defend herself.

Ms. Griner described arriving in Russia after an exhausting 13-hour flight — and soon after recovering from Covid — and finding herself in an interrogation in which much of what was being said remained untranslated. She said she was also told to sign papers with no explanation of what they were.

It was her first court testimony about her arrest in a case that has taken on outsize importance because of the war in Ukraine. The conflict has created the deepest rift between the United States and Russia since the end of the Cold War.

When Ms. Griner arrived for the hearing wearing a long-sleeved T-shirt, she had her wrists shackled in front of her, and she was flanked by a coterie of Russian security agents, including some wearing bulletproof vests, their faces covered by balaclavas.

The Russian authorities detained Ms. Griner, 31, a two-time Olympic gold medalist who plays for the Phoenix Mercury, about a week before President Vladimir V. Putin’s forces invaded Ukraine in February. She was accused of having two vape cartridges of hashish oil in her luggage when she arrived at an airport near Moscow. Russia did not make her detention public until after the invasion began.

What to Know About Brittney Griner’s Detention in Russia

Why was she in Russia? Griner was in Russia playing for an international team during the W.N.B.A. off-season. Trading rest for overseas competition is common among the league’s players for many reasons, but often the biggest motivation is money.

Ms. Griner had been traveling to Russia to play with a team in Yekaterinburg, about 900 miles east of Moscow, during the W.N.B.A. off-season. She was charged with willfully smuggling the vape cartridges, violating Russian drug laws.

Earlier this month, Ms. Griner pleaded guilty, saying that she had made a mistake and had unintentionally carried a banned substance into Russia because she had packed in a hurry. In the Russian legal system, a guilty plea does not end a trial; lawyers for Ms. Griner, who faces a possible 10-year sentence, expect it to continue into August.

Ms. Griner’s lawyers have said they hope her guilty plea will make the court more lenient, but experts say that her best hope is that the Biden administration finds a way to swap her for a high-profile Russian who is being held by the United States.

On Wednesday, Secretary of State Antony J. Blinken said the United States had “put a substantial proposal on the table weeks ago” to facilitate the release of Ms. Griner and Paul Whelan, a former Marine who was sentenced last year to 16 years in prison on espionage charges. He declined to discuss details of the offer.

The United States and Russia have “communicated repeatedly and directly on that proposal,” Mr. Blinken said. He said he expected to speak soon with Russia’s foreign minister, Sergey V. Lavrov, about the matter.

The Plight of Brittney Griner in Russia

The American basketball star has endured months in a Russian prison on charges of smuggling hashish oil into the country.

Testifying from an enclosed witness box on Wednesday, Ms. Griner said she had been planning to travel onward to Yekaterinburg but was pulled aside during a luggage check in Moscow’s Sheremetyevo airport, according to one of her lawyers, Aleksandr Boikov, from the Moscow Legal Center.

Ms. Griner testified that she had been told to sign documents during her detention without an explanation of what they meant. And Mr. Boikov said that an interpreter provided to Ms. Griner after her arrest translated “almost nothing” and that she was held for 16 hours before a lawyer came to help her.

Maria Blagovolina, a partner at the Rybalkin, Gortsunyan, Dyakin and Partners law firm who is also representing Ms. Griner, said in a statement after the hearing that her client had “explained to the court that she knows and respects Russian laws and never intended to break them.”

“Brittney confirmed that she had a doctor’s prescription for the use of medical cannabis, and that in the U.S.A. medical cannabis is quite a popular treatment among professional athletes,” Ms. Blagovolina said. “She emphasized that she never planned to bring it to Russia and use it.”

Ms. Griner also told the court that Yekaterinburg “became her second home, and she has always been enjoying her time in Russia,” Ms. Blagovolina said.

Before the testimony, Ms. Griner’s legal team asked the judge to allow the basketball player to testify outside the enclosed witness box because of her height. The judge, Anna Sotnikova, refused the request but allowed Ms. Griner to testify while seated, according to TASS, a Russian state news agency.